Gender Euphoria… Excerpt From a Memoir 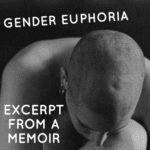 This class was focused on playing with the interconnected dynamic between performer and audience, posing the question: who is looking at who? The majority of our practical, perforative classes took place in a pair stand alone buildings, connected to each other, on the University campus. We lovingly called rooms B1 and B2. Each room had ample sprung wooden floors, perfect for any of us dancers in the class, dressing rooms and views of the sports oval.

For this exercise, part of our grading was based on the placement of our audience.

I closed my eyes. I visualised the space. I felt myself doing the activity, the warm rush of euphoria, the freedom, the sense that I was at home in my body every time I undertook this enterprise. As I immersed myself into the embodiment of this task, the interplay between performer and audience revealed itself.

I am near a wall, a plug socket. A mirror is placed in front of me, leaning against the pale brown bricks. A small bin at my toes. My clippers are plugged in, zero grading for a clean to the scalp shave. Intimacy was needed. The fifteen students in the class, plus our lecturer, Russel, would be tightly packed around me in a horseshoe formation, the closest person about half a foot away. I am sitting on the floorboards, legs folded under, ass on heels. I can feel their collective breathing at my back.

I had not contemplated how I might feel, in this iteration, being watched and watching them watching me. There was an anticipation, that someone may do something, shift a certain way, that I might glance at a face in the mirror, and be filled with shame, internalised transphobia. There was a hyper vigilance, but I felt safe with these folks at the same time.

I began the process of eliminating growth from my head. Shearing hair that had collected, holding thoughts, emotions, reaction. Shaking the pruning into the bin, feeling some remnants float down to rest on my skin, knowing some would settle into clothing. I was in a zone. The sound of these clippers, a catalyst to bring me into this meditative state. Gender euphoria of clipper to hair to scalp. Releasing, revealing, dismantling the roles and expectations of hair. Sustaining the ambiguity of gender from shoulders upwards, until a glance at my chest reigns down the wrath of an assumption of identity.

The empowerment that accompanied this head shaving process, fucking with conformity, with the default, has been a practice that has weaved in and out of my life throughout my 49 years. And in that two minutes, in the B1 practice room with Russel and my classmates, there was a deeper chasm of euphoria. There was an unexpected vulnerability, and those humans held that space, consciously or subconsciously, with nurture and care. The very nature of the course incorporated each of us revealing our shadows, exposing all we would hide elsewhere, and we were open, accepting, loving, nourishing with each other’s talents and contributions.

The two minutes was over. I had shaved about half of my head in an uneven pattern. And I was transmuted.